I will be once again opening my G+ game to various players, with a single caveat; there is a main group - the Yeso Mini-Campaign has grown much deeper then I thought and that party shall be continuing their travels throughout the Blighted Isle, The Shining Kingdom, The Broken Empire and that Strange and Pixelated realm.

However! Schedules being as capricious as they are, it can be expected that not all of them will be able to make each and every session. That is where you come in, dear heroes and heroines of FLAILSNAILS. Whenever a position is free, one of you will be invited to fill that spot. I'll hopefully try and sort all these things out a week or so in advance, but forgive me if I occasionally am a bit late. 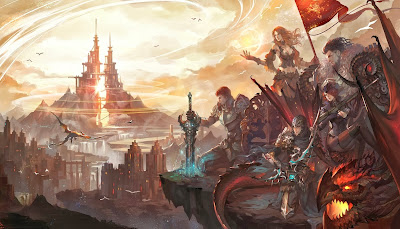 The hope is that we get all the long term goals and consistency of a normal campaign, with all the fun you get letting random jerkasses champions from other worlds come in and muck around. Said games will be run weekly, at 10 PM Eastern Time. Please contact me on G+ if you want to join in and you're not being invited already.
Posted by NaldoDrinan at 4:55 PM No comments:

I will try and update old' Bum Rush once a month at least, and there will still be Akenia/Barovania G+ games going on. My main focus is just going to be Break!! for a while.

Expect things to pick up again when I finish this bad boy and have a bit more time.
Posted by NaldoDrinan at 6:45 PM No comments:

Having broken off with it's mentor, the Wondersmith would be left to stare at what it helped create. Denied that right by an absent God-King, it instead looked upon the ebon sphere that surrounded and protected Promise.

It was a strange thing, that pulsated almost like a beating heart. It was warm to touch and supple, but unyielding. It was entirely different from earth and stone, and yet... 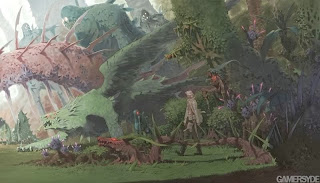 The Wondersmith acted on impulse. The words of creation were still fresh on its tongue, and it yearned to speak them again. And it did. It watched with glee as it saw mountains rise from the previously sterile black surface. Oceans came next and life soon followed. It was a world born in moments; to a more discerning eye, this place would seem haphazard, wild and dangerous. To the Wondersmith, it was a delight. It became The Outer World, a simple name that suited its maker just fine.

It explored this new place with eager joy, traversing its landscape and molding new creatures at a whim. Unlike its mentor, these lifeforms were crafted without greater thought and often were reflections of the Wondersmith's erratic mindset. On both poles of the sphere, it erected grand towers to direct the orbit of a  miraculous device called the "Sun Machine".

An eternal flame lay within this sphere, and its light and warmth shined on the new world. This gleam did not go unnoticed, however. Forces young and primordial were drawn to it, and their presence was quickly felt by the impetuous Demiurge.

The first were from the swirling void; Atrocity, Desire, Rot and Whisper. These things were unafraid of the Wondersmith, but the Sun Machine challenged them. Its light seared them and drove them back. They became content to move back and forth with the luminous apparatus, filling the spaces of the world where its touch receded. Their collective would be known to humanity as "The Dark."

From the bright without came Oppression, Judgement, Zeal and Winter. The four regarded the sphere's creator with respect, wishing only to dwell within the brilliance of this new place. They took a stance opposite of their predecessors, following the glory of the Sun Machine and becoming bolstered by it. Appropriately, mankind came to call them "The Light."

The third to arrive came from the unpredictable Wylde. Refugees from some distant fey schism, they begged the Wondersmith for refuge. It granted them succor near immediately, amused at the vibrant dramatics of the strange beings. They constructed a great city of ice on the northernmost point of the planet, beginning their courtly romances anew. Known first as "The People" and later "The Others" after the dawn of mankind.

The world existed in a sort of stasis for a time. Knights and wanderers from among The People would venture forth from their great castles of frost, slay beasts, claim treasure, and return home to spin great tales of their journeys. W
hile much would happen, nothing truly changed. The forces present could strike and repel each other, but they could not meaningfully interact.

Sometime afterwards though, mortals arrived. They emerged from a variety of places; some had found their way to the surface from Promise, others came from beyond in vessels of Starmetal. At least one species was born from the Outer World itself. Within these frail beings were the catalysts for progress, amalgamation, discovery and fear.

And with fear came the Grey Marquis, whom others would call death.

The demiurge met with the sullen figure whom taught it dread. For it gave the Wondersmith knowledge that someday, it too would perish. It would be no better then its mentor, leaving the world without it's creator.

Such a thing could never be allowed.
Posted by NaldoDrinan at 8:08 PM 2 comments: