My character's name is Barovania and its a Level 2, Chaotic Nintendo Setting

One thing I've noted before is that I like random tables a lot, especially in the middle of play. They add a bit of unexpectedness to one's experience as a GM, which is really nice because its probably my favorite part of being a player. It's one reason I don't like totally communal setting building in spite of what my laissez-faire attitude would suggest; it removes the sense of wonder and exploration that I love most about RPGs, D&D in particular. It particularly works against my favorite part of being a GM, which is world making.

As a result, I tend to keep a lot of setting stuff close to my chest so it can be revealed in game. My compensation has always been to be accommodating when it came to the player's decisions on what to play - even the oddest or seemingly off kilter sort of PC could be from another time or dimension or something. I realize that this is because I'm trying to show them the same courtesy I'm requesting of them. They are agreeing to let me run the setting I want (within reason), so it seems only fair they get to play what they want (also within reason).

In this sense, I've always thought of the setting as my PC when I'm GM-ing, being that its my way of interacting with the game itself. Obviously it doesn't line up exactly, but there are a great deal of parallels - The player's character can die, the GM's setting can be irrevocably changed by PC's actions. Random tables can be spells, attack rolls, or a background generator. Showing off the stuff marked on your map is not to far off from talking about a particular PC's back story or foibles. There are different styles that match up too - a player may be using a PC who can't die unless they say its kosher, or someone may run something where no one can beat Caine.

This seems even more obvious to me since I started playing in and running FLAILSNAILS games. My paladin can have his sunsword magically snatched away from him by a Jackal-Man of Cobalt reach, or Akenia's Flame Gigas can be totally blindsided by someone's Dungeon Crawl Classic spells. We are all playing the same game.
Posted by NaldoDrinan at 6:23 PM No comments:

Generations ago, the valley of Yeso was a region of peace and tranquility. Located on Isle Boshin, a small island in between Akenia and Calian, it enjoyed a sort of prosperity that was unknown even in the shining kingdom. Fertile land and a rich harvest guaranteed that its people would have plenty to eat and trade; the Yeso River (for which the valley is named) served as transportation and a source of nourishment and protection. And while the vale is also populated by fierce predators, its humanoid inhabitants are a fierce and hardy people known as the Sian-Ja.

The Isle's well known status as a holy place also afforded it a bit of security from its larger neighbors. While the Sian-Ja where slain, routed or chased from both the Akenian and Calian mainland by their current inhabitants, Boshin was left alone due to the fear of unleashing a terrible force that was sealed their by some magic of the Isle and the people there.

While understandably bitter from the ordeal, the Sian-Ja decided that surviving at all was most important and kept reasonably amiable relations with both empires.

This was all in till the Mana War, which ended less then a generation ago. While officially neutral in the conflict, Boshin was often used as a secret battlefield by unscrupulous commanders on both sides, and the land became especially ravaged during a battle between the Gear-Mage Dizer Gren and the colossal bio-titan now known as the Still Behemoth. Something particularly bad happened during that conflict, and has left the Isle in a rapidly declining state from which it has yet to recover. Some say the very land has become poisoned in spite of what wonders may still lay there. Perhaps the greatest tragedy is that the once proud Sian-Ja have been reduced to desperate refugees in their own land. Some theorize they will not survive the next decade.

Recent events have attracted adventurers from Akenia, Barovania, Calian and from lands afar. Some wish to help the inhabitants of the Isle, others wish to plunder what still remains. Some have heard terrible whispers of the terrible evil beneath Boshin awakening, and others still claim some lost weapons from the Mana War may be there.

Will they find glory or death in Yeso? It matters not; the forsaken land doesn't care. 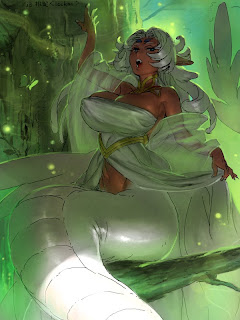 - FLAILSNAILS Characters are welcome, as long as they are not over Level 8. They may be as low as you like, but you may want to be at least Level 2.
- Characters native to either Akenia, Calian or Barovania will gain a bonus roll on the rumor table at the beginning of play.
- Please Note that items, even ones from Barovania or Akenia, may not function quite right in Yeso Valley. The reason for this is not quite known, but it seems connected to the other disturbances in the valley.
- We are currently full up on players, but this post will remain up for future reference and if anyone new joins. Please feel free to post questions in the comments below.
Posted by NaldoDrinan at 5:27 PM No comments:

One of my favorite bloggers and good pal Ian has put together for this Kickstarter for his pride and joy, a zany little game about assassins, the people they kill and the crazy stuff that results from it. You really ought to go check it out! Go on, click the link!

Its really something special, ain't it? You may wonder why I'm talking about it here though, as opposed to simply re-sharing it on various social networks. Well go check the stretch goals. Specifically, check between the spots they talk about the world's nicest gamer and that one goth guy. Oh wow, would you look at that? Its a mention of me!

What does this mean? (Beyond Ian's slightly dubious taste in business partners, obviously) Well, it means I'll be pouring my heart and soul into a little portion of this game if it gets enough backing. I don't want to talk about it too much - but if you ever wanted to join in the rubber suited fun of Japanese Super Hero TV, hijack a giant robot, or just put a bullet through the eyes of that asshole whose taking an inordinately long time to transform, I may be able to deliver. 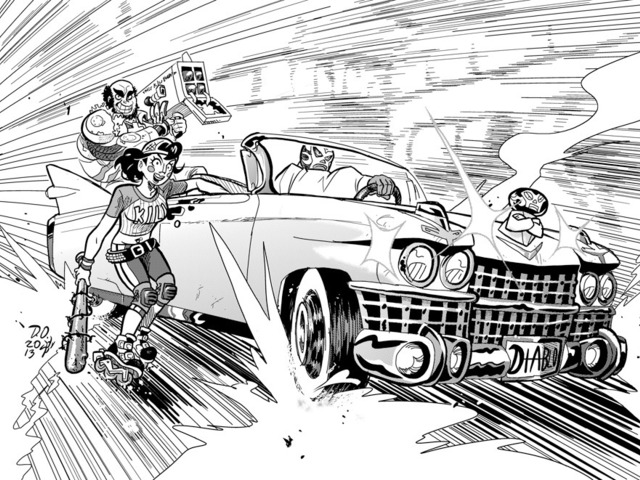 Posted by NaldoDrinan at 1:51 PM No comments: