I finally get Emily Dickinson

I actually liked a lot of the stuff we were forced to read in School; To Kill a Mockingbird is among my favorite books to this day and things like Paradise Lost and Huck Finn aren't too far behind. Still, I wasn't able to really get into everything. For one, I just couldn't appreciate Emily Dickinson's work.

My primary obstacle was my inability to understand her motivation for writing. The first thing we learned was how she would hide away the things she wrote as opposed to sharing them. That didn't click with me; writing is hard! Why wouldn't you want everyone to see what you had done? What was the point of doing something if no one would ever see it? What was the point of creativity without consumption? With that in my stubborn adolescent skull, I was poised to dislike anything of hers I read.

And I did. I quibbled, I nitpicked, I just didn't get any of it at all.

Fast forward to yesterday, a dozen years or so after my first encounter with Ms. Dickinson. I'd not really thought much about her since then. I'm having a conversation with a player about one of my recent gaming sessions, pertaining to a valuable item they had discovered and and all the hooks and ideas I had connected to it.

The player asks me with honest concern. "What if we just sell the thing? Doesn't that invalidate the thought you've put into it?"

Well no, of course not I said. I could always use it for something else. Besides, it had been fun to come up with.

And then he asked "Do you just enjoy creating campaign stuff? Like, even if no one ever really sees it?"

Well of course I do. My closet has a pile of spiral note books in it from all my past campaigns, those fulfilled and aborted. And I could talk all day about any one of them. There's Zwietorhiem, both literally and figuratively a city of two gates where both the living and the dead reside. There is Awesome City, a bay-side metropolis that was perpetually stuck in 1994 and intended for my Teenage Mutant Ninja Turtles game. There are at least four settings from my D&D 3.5 days alone. Many of them only half used, or worse, totally unseen by anyone but me.

And then came the epiphany. This was just something I loved and wanted to do, and probably always will be. I finally get Emily Dickinson.

Now, I'm not comparing myself to her really. I can't know how she felt about her own writing. But I totally understand why someone would put something they found beautiful on a page and be OK with simply tucking it under their bed and never mentioning it again.

Posted by NaldoDrinan at 8:53 PM 5 comments:

Rules I don't use, at least not correctly anyway 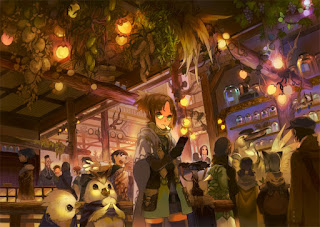 So Jack posted this and I love bandwagons that people smarter then myself start.

If it wasn't obvious from the various classes, patchwork anime settings and high speed car chase rules, I don't quite play D&D as it was initially intended. Or maybe I do, if you think the game was made to be customized by the person running it (which I do, or at least I hope.)

Anyway, I do actually use a lot of the rules included, just not as is. Off the top of my head;

Alignment - I love alignment! Sort of. I like to use it as a vague connection to some absurd cosmic plan that you really don't understand. Its not about having any real semblance of moral clarity or purpose; some magic works better on this guy then it does this one and that's really the only semi-concrete thing going on here.

Really, players can write whatever the hell they want in this box. In the end, it should matter to them, not me.

Encumbrance - Don't abuse my good will and I won't bring it up. I'm looking at you Jill Valentine.

Descending AC - I like Ascending better, but I think most people do nowadays.

Domain/Retainer Stuff - This isn't connected to level, save that at name level people who've heard of you sometimes show up to try and ride you like a rodeo show become your loyal followers.

Movement Rates - I'm such a terrible person. I just write in Very Slow - Slow - Normal - Fast - Very Fast and use it to estimate stuff in combat. Hell, I even do this at home and I use a battle-mat.

Ability Score Requirements - Nope. You don't get bonuses for them either.

Experience - I use all sorts of silly sources for experience points, including just learning stuff about my goofy setting.

Morale - I love Morale. I use it for a lot of things though; Will a monster run? Will an NPC stick to their guns in an argument? Will your follower betray you while they are being tortured? And so forth.

Specific Weapons And Armor - I use broad classifications instead of specific ones, just so I can justify any number of absurd aesthetic choices.

Treasure Types - I like to think of them as helpful suggestions.

Magic Weapons or Armor with flat bonuses - Generally you'll get a "Strikes/Protects as Magical as well as this other unique thing" because I just like that.

Please note that these aren't slights or commentaries on the rules above or anything else; I just think its genuinely interesting to talk about this kind of thing.

Posted by NaldoDrinan at 8:43 PM 5 comments: