A thing that is happening; The Wistful Dark

After a way ward comment to one of her posts, +Scrap Princess has been encouraging me to run something "Wistful but ultimately optimistic". In fact, I had been trying to hash something out along those lines for a while now - I made a a vague and unhelpful post about it a few months ago, but I've not really said anything about it since then. Its certainly morphed into something far more cohesive over time, and is some ways a spiritual successor to many of the structural ideas I had for Barovania, if not in story.

The Wistful Dark is a term that Scrap coined half-jokingly, but I've gotten very attached to it in a really short time so its sticking. The general idea of the setting is to present a place that is in rapid decline, but not all gone yet. From a more meta standpoint, its a place that the players can try to save or fix, without it being a "save the world" situation where less heroic characters would be forced to do so.

The rest of this post is really just me thinking aloud about the setting, system and other things I want to do with this. Once I'm a bit further in, I'll make more constructed posts.

Something I didn't establish (initially, at least) with Barovania that I'd like to with this one is a sort of "home base" for the characters. Obviously not a literal base, but a default place for the PC's to be between any given session of the game.

Right now I'm leaning for a largish-town marked with a desperately held stability. The people there would be surviving and maybe even happy, but there would always be looming threats and an understanding that what they have could taken away. Most normal adventuring equipment could be expected to be there; but if you're looking for fine armor, exotic weapons or other items you'd need to travel further out or even at adventure to find them. It also means the Players can take an active roll in the town (If they want too) and start business, expand or fortify the place. There was a great kingdom only a few generations ago. Not perfect, but it was a land where people could expect to live decently. Nothing lasts of course; but the whole place began to crumble and fall suddenly and presumably needlessly. No one speaks about exactly what happened, but the entire government started to lose its grip on the place and it quickly started fragmenting and going to pot. The grand order of Knights that were the land's official guardians fell into disfavor, fragmenting and seemed to vanish completely.

With most of the infrastructure rotting and crumbling, petty lords and other ambitious sorts among the low nobility and very rich made their moves to consolidate power. What once was a glorious kingdom was now many small countries - the typical nonsense followed, alliances, petty land disputes, the normal stuff.

So far, I've got a couple good ideas for the various lords of said provinces. A Witch King, a Bloody Handed Queen some sort of merchant cabal and a religious nut are all on the table. They range from banal tyrants to super-natural despots; I like to have a variety of villainy at my disposal. Conversely, the "home" base town would be ruled by someone who is either much nicer or at the very least, not an outright bastard.

Overland travel would be inherently dangerous. It wasn't just political infighting that crumbled the last kingdom. Something seriously wrong happened, and the very land seems infected with it. Strange and murderous beasts now crawl about the land alongside the normal fauna. They infest every conceivable region as well - if someone is going to travel, they will need means to defend themselves. (Naturally.) 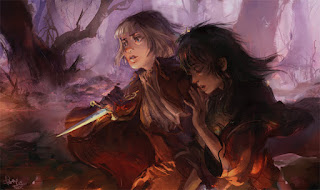 I really, really want to use my recently acquired Warhammer Fantasy Roleplay 2E book for this game. Though the setting will be largely abandoned (This is not a slight against it, I love Warhammer but I don't think I can run a game for too long in a setting that's not  my own) but the mechanics of the system will be in use (At least mostly. I'm probably using the Basic armor rules as opposed the advanced ones, and I'll obviously need to alter/reflavor some of the careers slightly) 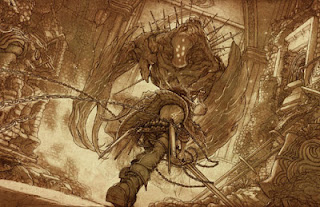 Also, as I mentioned - I'd like the home town to be expandable by the players. Having characters that are innkeepers, merchants, guards and the like are boon to this way of thinking.

Possible alternatives; Chaosium's BRPG provides me a nice skill system to use and its easy to hack. I wouldn't mind using it at all, though it just doesn't fit as well in my head. D&D is of course, on the table as well; its not a perfect fit but I know it well enough that I can fuss with it to make it work.

Optimally, I'd run this on G+ and at home. If I work it the way I'd like too, it'll be an evolving setting as opposed to something attached to a specific campaign. I'm thinking I'd like to run a few sessions here and there before starting in full force.

A perfect world, or none at all (An attempt at Cosmology, Pt 1) Long ago, there was naught but the primordial stew of possibility. Dreamed by the slumbering lords of chaos and then cultivated by their feverish visions, this never ending stream of creation churned ever onward, never resulting in anything of substance. Far away, one being looked on with great dismay.

This simply could not stand.

He arrived with a thought, driving away the lords of chaos in a wave of ultimate order. With a great harmonious chorus he drove borders into the sea of creation. Using those grand barriers, he created shape and time. Possibility had not been destroyed, simply cultivated. The being was now proud - perhaps even smug - as he saw the beginnings of life start to crawl about this new place. He granted some of those small creatures sentience so they could behold the gifts he had given them and worship him for them. After some time he left to slumber and contemplate his greatness.

The lords of chaos eventually recovered as those things truly immortal are wont to do. They returned to their playground and found it forever marred. What once was fluid and beautiful was now trapped by form and bound by inevitably. They pitied the little forms that scrambled about the wracked primordial. For as unbreakable as their new prisons where, their souls screamed for the freedom they once knew. They took solace in the fact that these tiny things would forever be able to choose no matter what came about and then abandoned the ruined place for something new.

The creatures left behind used both curses inflicted upon them to adapt, evolve and expand outwards. What once was the idle distraction of the cosmic was now theirs. Mortals shaped the land and created their own sort of miracles. Great creatures and walking gods emerged amongst them. Some could even bend the eldritch to their. Surely, these small beings had outgrown their need, their obligation to their negligent creator?

Not all feel as such.

Far away, one being looked on with great dismay. Such ingrates! He thought. The audacity! They had forgotten him! They did not sacrifice to him, call to him, worship him! How dare they! Mortals had committed an unforgivable crime. It shouldn't have been possible, not when one such as he had his hand in their making. Unless...

These creatures had been born from chaos. His methods may have been perfect, but the materials were not. Their failure made all the more sense now, and this simply would not do. He would have to start over, with a perfect world made from order and a perfect people who would not stray. The flawed world would need to be burned away, so there would be place for this paradise. The unrighteous would be annihilated and only the truly faithful would be remain to see the glory of his perfect world.

The lords of chaos will defy him,  He is order. He is Law.
Posted by NaldoDrinan at 7:25 PM 1 comment: