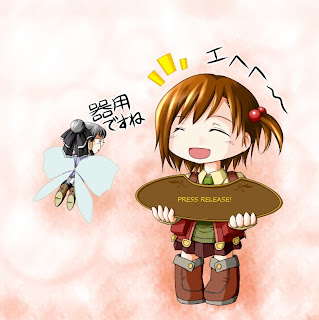 To all our fine customers, (a)moral protagonists and masters of dungeons and games,

Here at Puella Potions and Miscellany (We have a total of three employees now!) we work our utmost to make sure that our customers, current and prospective, are not only satisfied with their purchases but well educated and well versed in their uses as well. This is an exceedingly important aspect to our interest in prolonged business; when one is a purveyor of potent potables and other potentially dangerous items, safety is definitely a priority.

You can imagine my alarm when I found that one of my newest products, The Once-a-day food pellets had reached the shores of other dimensions and were being used as makeshift weapons! The horror! I hadn't even released them officially yet. Perturbed as I was, I managed to keep cool about the whole situation. Honestly, the best thing I can do is inform as many people as I can on the proper use of my pellets. If you want to go ahead and use them all willy-nilly-dilly-wrong then that's on you Mister Meanie, not me.

Anyway! On to the point of this press release.

Article 1) On proper use of nutritionally viable Poko-Pellets

Loaded down with iron rations? Tired of taking constant snack breaks between dungeon rooms? Wizard getting a little flabby from high calorie adventuring food? Fret not weary traveler! Puella Potions and Miscellany has the solution. What if I told you that you could swallow a small pill in the morning to sustain yourself for the entire day? Trust me. I'm not gonzo - such a product is available to you dear adventurer, for a reasonable price! Pick up your packs of "Poko-Pellets" today!

Instructions: Take one pill a day, each morning unassisted by any liquids save ordinary water. Do not consume any other food for twenty-four hours or swallow anymore Poko-Pellets. Please refrain from drinking any liquid beyond ordinary water for at least eight hours after ingesting your pellet.

Article 2) Effects of being a Rudy McChurlish and not following the specific instructions contained in Article 1
Look, this isn't my first time selling potentially dangerous items to the occasionally irresponsible vagabond OK? I know what some of you are thinking. I know I can't change your minds, but at the very least I can provide you a guideline as to what may occur if you mess around with my poor little Pokos.


The mishap and side effects, alongside their probability of occurrence have been organized in the universally recognized format; The random table.

IF POKO PELLETS ARE MISUSED PER THE FOLLOWING

01 - 20: Nothing obvious happens initially; subject gains (1d4 x 50 pounds) while sleeping. Weight gained is otherwise normal and should be treated as such. Generally it may only be lost via conventional means. If Pellet is suspended in a container with liquid, it just seems to expand slightly and crumple apart. 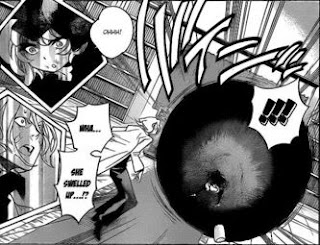 21 - 34: Subject immediately begins to swell up like a balloon for 2d4 rounds. Armor and clothing will snap off; Armor does damage to the subject equal to the AC bonus it provides. Subject is very vulnerable and plodding in this state and incurs a -4 penalty to attack roll and their total Armor class. Movement rate is quartered. Bludgeoning weapons do half damage, while slashing and piercing do double to the subject. This expanded state lasts for 12 hours. Pellets placed in a strange liquid turn whatever they are immersed in into a gas.

35 - 38: Same as the above result, except at the end of the initial 2d4 process a saving throw versus death must be made. Failure indicates the subject has exploded.

39 - 49: Prismatic Bull-Malarkey. One of the following spells explodes from the pellet or is vomited forth by the subject; (1d4 Roll) 1-2: Color Spray, 3-4: Prismatic Ray. If vomited, the subject inadvertently aims the spray into a random, 15' cone. If the pellet itself explodes in a container, it is instead a 30' circular area. Both spells count as being cast by a magic user of the minimal level for the spell rolled.

50 - 57: The subject must make a saving throw versus magic or transform into a small, adorable creature with no discernible use. Combat and magical abilities remain intact, but they may only speak a single nonsensical word and cannot use their old old equipment. Their natural weapons do 1d6 points of damage. The effect is permanent in till Remove Curse or a similar, more powerful spell is cast upon the subject. A non-swallowed Pellet transforms into a hideous squish-toy of no real value.

58 - 68: The subjects general coloring changes to an adorable theme; this effects not only the hair and skin of the swallower, but also their equipment. Themes include (1d4) 1. Peppermint, 2. Peaches and Cream, 3. Mint Chocolate Chip, 4. Strawberry Cheesecake. There is a 30% that accessories, weapons and armor will be altered cosmetically to fit the theme rolled. An independent pellet squeals like a small child and melts into nothing.

69 - 74: A saving throw versus magic is prompted in the subject, if failed they will begin to Levitate uncontrollably for five minutes. A free-floating Pellet does the same.

75 - 80:  The Subject must make a saving throw versus magic, roll again if failed. The subject believes the new result is happening, but it is most certainly not. A non-swallowed pellet bursts into razor sharp confetti, and anyone within 10' of the resulting pop takes 2d4 points of damage.

81 - 85: Subject/Pellet begins to spew harmless white foam, but can do little else but move a half their normal rate while this is happening. This continues for 1d6 rounds - the foam dissolves harmlessly, but will kill most extra-planar (55% chance) beings on contact. 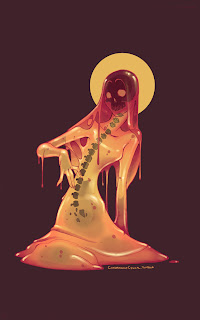 86 - 89: Subject's body loses its consistency and form, slowly transforming into a slime-like version of themselves. While they gain the ability to stretch, flatten or otherwise contort because of their newly malleable status, they are no  longer able to run or wear armor or clothing.

90 - 94: Subject transforms into a terrifying, monster version of themselves - all equipment fuses with their new grotesque form, their HP total Doubles, a +2 to attack and +4 damage is gained. They also hate a random person in view and would like to make their insides their outsides. This effect lasts for 2d4 rounds. A non-swallowed pellet grows an excited face, which contorts to a disgruntled one right afterwards.

95 - 99: The Poko Pellet achieves its ultimate form; the Poko-Dono Pellet! If swallowed, the subject needs never eat again. They will never grow hungry, though water is required to remain alive. However, consumption of any food or imbibing of any non-water liquid will result in a roll on this table. An independent Pellet turns bright gold and gains a small crown. If eaten, it will have the effect included in this entry.

100: The subject must roll a saving throw versus death or die in a ludicrously gory and dramatic way, usually resulting in enough blood to coat the entire room. A pellet suspended in liquid will grow a face and weep tears of blood while screaming loudly. 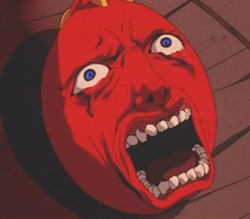 So Zzarchov, Scrap and Joey have been throwing around ideas on how FLAILSNAIL's GM's can limit the use of strange powers or items coming in from some of the various universes without shutting someone down completely. These are all fine ideas and well within the spirit of the community that has sprung up around these campaigns.

Initially I thought adding to the list of ways to do things, but truth be told I'm pretty sure the problem isn't things coming into my games so much as leaving them.

So I scrapped the idea, figured I'd leave that to the people who've already proven to be proficient in it and try policing my own damn game instead. I've noticed that my adventures tend to vary quite a bit in difficulty, usually depending on the subject matter and methodology involved, so why not quantify that for player use?

Each Barovania session should be assumed to be in NORMAL mode, unless stated or requested otherwise by myself or the players. 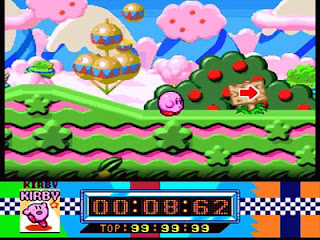 EASY MODE - Sometimes a light touch is preferred. PC's are considered "Knocked out" at zero hit points and won't die unless abandoned (or otherwise kept from) their friends. All powers from other games are in full effect and characters of all levels may join in. Expect "Save or Ow."
The DM may give hints, but punch will not be served. Dungeon Maps will be drawn for the players as they go along. 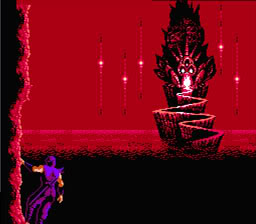 NORMAL MODE - Characters are unconscious at zero hit points and will bleed out at a rate of one hit point a round in till they are stabilized, either by healing magic or a successful wisdom check by another player. Players may bring any sort of character they like to the game, but the DM reserves the right make calls mid-game if stuff gets all wonky. Expect a variety of "Save or _____", including "die".

The DM is not your friend at this level, but he doesn't hate you enough to laugh too hard when you get eaten. The DM will draw Dungeon Maps as the players go along as with EASY mode. 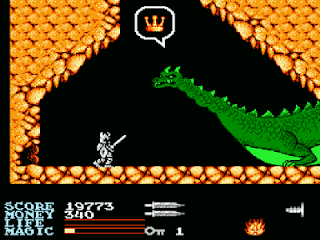 HARD MODE - Characters are dying at zero hit points and have 1d4 rounds to be stabilized before they are dead for good. Players may bring any sort of character they like to the game, but special snowflakes can expect to be targeted ruthlessly by monsters in till they are eviscerated on the ground. Some more out of scope powers may be revoked, but the player will be warned ahead of time. Monster's "Number Appearing" and "Hit Points" will be weighted in favor of beasties. Expect "Save or Die", "Save or Screwed" or "Save or wish you were dead".

This is the level where the DM likes to smile, gleefully. He will not draw a damn thing for you, save your character getting eaten. 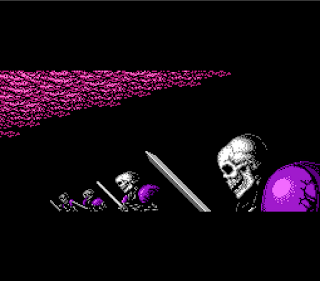 NIGHTMARE MODE - Characters are dead at zero hit points and can expect to be eaten or torn apart unless their bodies are recovered quickly by their friends. Only Standard Barovania characters are allowed.

"Number Appearing" will be weighted in the favor of monsters and "Hit Points" will be automatically at maximum value for them as well. "Save or die" will be prevalent and you can expect the DM will be keeping ACCURATE TIME RECORDS and demanding who is holding the parties' light source whenever its pertinent

The DM will draw out personal threats and mockeries on a misleading map for you at this level..
Posted by NaldoDrinan at 5:56 PM 2 comments: