I know I've been saying/threatening everyone with this for a while, but I am seriously considering running something at a semi-consistent time on G+. There are too many cool people there to ignore, and I'm always looking for new places to hone my Game Master skills and practice what I need work on. I've only run a single game via hangout thus far, but I had a great deal of fun and I'd love to give it another go. Of course, I want to see if there would be people actually interested in it.

The game would take place in Barovania, where the names of people and places are inspired by Ravenloft and everything else is influenced by NES games, various literary sources and whatever other stuff happens to be on my mind at the time. It would be FLAILSNAILS compatible, but I'll probably work out a simple character generation document if there is any interest in making PC's specifically for it. Focus would more then likely be on Dungeon/Adventure Site exploration, with potential for urban crawls as well.

Time is a big factor of course -  with the lady-friend looking to do her church thing on Saturday evenings so she can sleep in on Sunday, my most eligible time would be between late Saturday night or very early Sunday mornings (Somewhere between 11 PM EST/03:00 UTC Sat and 10 AM EST/14:00 UTC Sun). I can try to schedule another time if people are interested in playing but can't make that particular frame. Sessions would probably last about 2-3 hours.

In spite of talk to the contrary, magic is a tangible force. Regardless of the specifics behind where it comes from, energy of some kind rips through reality to create some sort of fantastic effect. For the most part, this energy is burned away in the process of a spell - a fireball or magic missle disspates with casting. However, occasionally a spell will leave some sort of residue.

Prismatic spells are especially bad about this. Any monster whose lived long enough can point out the tell-tale color splatters along dungeon floors and walls that indicate you have some rainbow throwing asshole mucking around your home. The trouble with these multi-hued messes don't end there however, as there are a handful of these pools that retain just a bit of magic.

Sometimes, bugs will get to them. And what happens when an ant or a bee returns to its nest with rainbow juice from its latest sortie? Well, if they survive the initial exposure, a Prismatic Swarm, thats what.

Said swarm becomes hyper-charged with strange magic and usually ends up looking like a rolling or flying cloud of stained glass from far away. Once close, thier actual properties become pretty obvious. The creatures that make up the swarm are now sustained as well as driven mad by that sorcery, and attack any mobile target that crosses thier path. 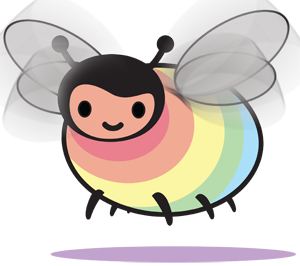 
Special: A Prismatic swarm actually engulfs a potential victim instead of attacking them normally. A target may make a saving throw in an attempt to get out of the way - if they have been engulfed however, they are hit automatically. They may make another saving throw to escape on subsequent rounds, or try some other means of escape. As a note; fire will not disperse the swarm, but submerging oneself in water will cause them to seek other targets.

Whenever the Swarm "hits" someone, roll a 1d8 and consult the following table;

Due to the nature of a swarm, normal attacks only do 1d3 points of damage to it. Attacks that effect a large area will do normal damage.
Posted by NaldoDrinan at 8:05 PM 4 comments:

If you went to an elf a couple decades ago, and asked them "Hey, whats an Octorok?" they probably would have looked at you and said "How the hell should I know?" except they would have done so in a matter befitting an ancient and enlightened race.

Anyway, that was then. This is now.

When the great Devil Swine came to the land of the elves, he was quick to unleash any number of beasts upon the unsuspecting servants of wisdom and courage. While his army of Iron Knuckles, Wizzrobes and Stalfos stomped out the armies of the royal family, roving bands of monsters ravaged the countryside and chased the rest of the elves underground. Among these, the fierce canine Moblin is perhaps the most famous - but it is the Octorok that is most plentiful.

These small creatures are malignant little entities with octopus like forms and an an ability to spit rocks at a high velocity. (They also seem capable of generating ammunition for this attack, but its not terribly well understood beyond the fact that Octorok's consume earth and stone in lieu of normal foodstuffs) This used to translate into them jumping elves and pelting them with stones, perhaps even giggling evilly as they did so. Since nearly all elves are trained in combat nowadays though, things have been going less awesomely for the stone-shooting octopods.

As such, many Octoroks have actually reconsidered their options. A few have attempted to communicate peaceably with the elves or offer to do business with them. This has had mixed results as most elves still hate them based entirely on principle. Fewer still decide on a life of adventure, with the hope in their heart that maybe, somewhere, there true way of life remains to be found.

Though, most of them probably do it because they are greedy little buggers and the Devil Swine's payroll is crap.

Octorok Class
(Intended for OSR Usage, its probably not that hard to kit-bash)

Hit Dice: 1d6 for levels 1-9, +2 after that
Combat Progression: Cleric
Save: Fighter
Weapons Allowed: Any
Armor Allowed: Shields Only

Fire off Rocks: Octorok's shoot rocks out of their mouths, its pretty much their main thing.
The craggy projectile has a range of 40 ft, and can be fired each round in lieu of a normal attack. Damage for a rock begins at 1d6 at levels 1-4, increases to 1d8 at levels 5-9, and 1d10 at level 10 and up. Octoroks may add their dexterity bonus to hit with this attack, and their constitution bonus to damage rolls with it.

Tentacles : Octorok's can hold more items or weapons then a normal person can, counting as having four "hands" instead of two. If multiple weapons are held (or when fighting with a free tentacle) then an Octorok may re-roll a miss in melee combat. If this is done, the additional roll must be made with a weapon other then the one used in the initial attack.

If an Octorok makes an attack when unarmed, its tentacles do 1d4 points of damage.

Leap: Octorok's are surprisingly good jumpers, and can make 10' high vertical leaps without a running start. They may also make leaps at double their normal move if they choose not to utilize their rock projectile attack.

At level 5 an Octorok turns blue, and its rock attack counts as a magical weapon for purposes of dealing damage to certain monsters.

Posted by NaldoDrinan at 7:59 PM 4 comments:

Today's session had one of situations that I think are awesome that would have lost a lot of impact if scripted.

The catalyst was classic; the PC that was on watch while the rest of the party was asleep actually fell for the "Look over there, its a shiny" and wandered off to go see what it was and confirm why it was so shiny.

Now, this sort of thing generally leads to something between innocuous chicanery or instant death, depending on what the shiny thing actually is. Today, it left the sleeping party prey to something that had been following them around for a session or two that they had not been aware of; an invisible stalker.

So it quietly creeps up to group, and finds the smallest outlier - a spunky gal named Esther - wraps its hands around her throat and starts strangling her. The stalker manages to get its fingers around tight enough to prevent her from breathing at all, or making much of a sound. Esther's player tries some pretty clever stunts to break free and/or alert the rest of the party, but the dice are just not on her side today.

I keep rolling high for the strangulation damage, and I realize that this scenario would be a really awful way to die. Esther is kicking and fighting to no avail, being suffocated by a murderer that she cannot see, and her best friends in the world are literally no more then ten feet away and completely oblivious.

Hey, no one promised that dungeon crawling was glamorous.

Posted by NaldoDrinan at 8:40 PM 7 comments: