This is actually a pretty useful thing, so here you go.

...but would also try: A lot of stuff, probably not something with an easily predictable outcome or something where I can't lose or die

I live in: Maryland, USA

2 or 3 well-known RPG products other people made that I like: Vornheim, Exalted; The Infernals, Arduin Trilogy

2 or 3 novels I like: The Ill Made Knight, To Kill a Mockingbird, A Wrinkle in Time

2 or 3 movies I like: The Big Lebowski, Time Bandits, Fist of Fury

I will read almost anything on tabletop RPGs if it's: Either heavy on extremely interesting ideas or applicable to a wide variety of things.

I really do not want to hear about: I've got no pet peeves at the moment, really. People have been really nice to me.

If you know anything about _____ it'd help me with a project I'm working on: Layout or making PDFs that look alright, good god help me.

I talk about RPGs on ____ (social media site and/or RPG forum name) under the name Google+, Reynaldo Madriñan
Posted by NaldoDrinan at 1:30 PM No comments:

I mentioned some cool dungeon-centric games coming out of Japan today on one of Scrap's G+ posts, and Cole asked for examples so I started typing this off.

This is a good reason for me to talk about why I like the Japanese aesthetic so much when it comes to gaming. On one hand, I already like the stuff - but I think the biggest reason has to do with how permissive the style tends to be. Some people will see a samurai, knight, robot and what looks like a modern school girl walking around in the same place and just go "Oh. Anime." which I'm sure is actually reductive in some people's views but one look at the other entries on this blog will tell you I think its a positive.

Demon Gaze - This game features a protagonist named Oz, who has a magical eye that can seal demons away. Beyond that, you explore a fantasy world, have a few random dating simulation style bits in an inn and get to assemble your own party Wizardry style. In fact, all the games here take a lot from Wizardry. Which is still super popular in Japan.

Anyway, the setup is good fun but really the thing here I like is the designs. 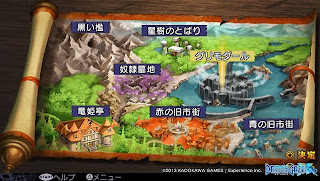 The world map is pretty much perfect; its simple but you know what your going into with each one of the locations. Its actually pretty close to what I attempt to do a lot of the time. 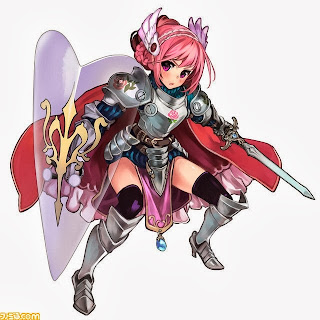 To the right we have one of the character portraits for the Paladin class. I like how the armor is fancy/cute and that she has a clear, riot squad style shield. 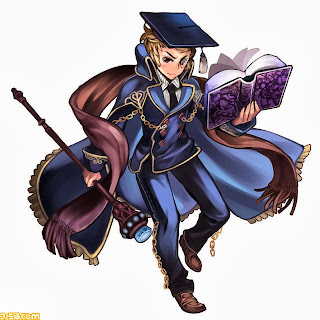 Here is a wizard - I really dig the stylish outfit and opera cape. I could do without the silly hat but I suppose that that's required wizard attire. 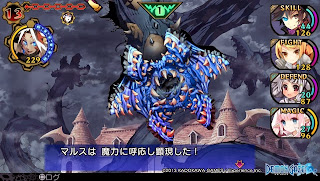 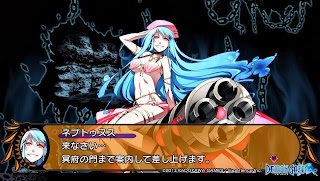 To the right is a boss fight and an interaction with an NPC (Which is likely to lead into another iteration of the former). There is that odd contrast in aesthetics I mentioned way up in the beginning there - you have cute little characters, horrifying teeth monsters and death pinups with chain guns all in an otherwise typical fantasy game.

(I should note there are lots of pretty boys without their shirts on in the character art as well, which is a nice bit of equality you don't see often enough. I just don't happen to have as many of those pictures on my hard drive...) 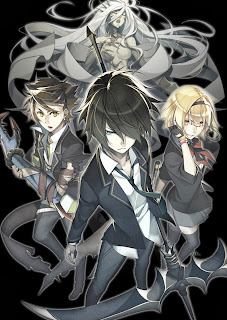 MIND≒0 - In contrast with Demon Gaze's vibrant, colorful art, we have Mind=0, which is slick and uber-stylish. Also unlike the previous game MIND takes place in the near future, rather then a fantasy world.

The game gets around the contemporary world's lack of D&D style dungeons by having the characters enter a parallel spirit world when adventuring. They are accompanied there by strange spirit avatars that provide them with spells and the like. The two above things and a cast of predominantly high school students has gotten MIND a lot of comparisons to the Persona games, but this is hardly a negative things. 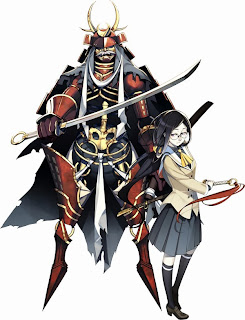 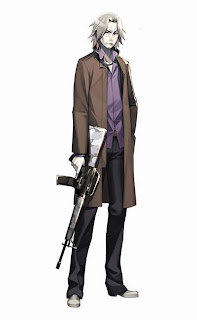 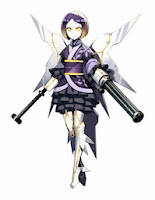 Some more art of some characters and their avatars. The girl on the right is Katone, who has my favorite Avatar. She's also the quiet bespectacled girl of the game, which tend to be my favorites anyway.

To the left is Yoichi and his avatar. He strikes me as the older, practical type. Besides being, well, older then the other characters, he is armed assault rifle as opposed to a scythe or katana or whatever. His avatar seems a bit incongruous, but hey, its got a machine gun and a sniper rifle for arms, so it still works in his favor. 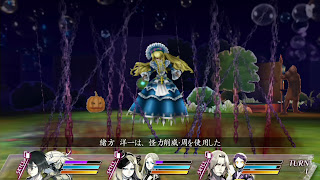 The dungeon-scapes are cool, but mostly functional off color/ruined city stuff. Some are really neat, like the one to the right that looks like it was drawn by a little kid with crayons and construction paper. 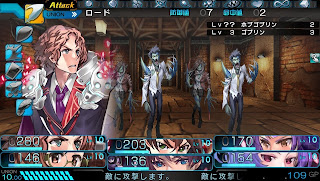 I've saved the game with the most absurd name for the last! Tokyo New World Record: Operation Abyss is a sequel to another game I don't know anything about. It takes place in a post apocalyptic world where things have turned into mutants and all the people have allied to explore ruins and fight them. Also high school students do a lot of the dungeon crawling for...well, reasons. You play a group that have graduated from some dungeon crawling academy. 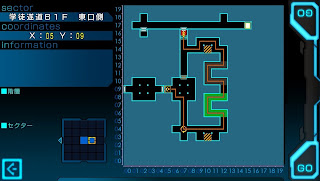 I obviously had the wrong major back in the day.

Anyway, this has the same sort of Wizardry set up as Dungeon Gaze. You create your own party and maneuver about dungeons. It has the least creative setup of the games mentioned here, but I actually like the art a lot. 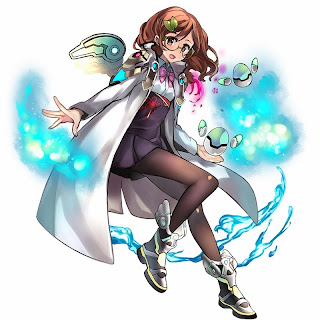 Here are some of the protagonist portraits you can choose from.

To the left one of the game's caster type characters. I really like the little mechanical helpers she has; I think there is room for mecha-familiars in D&D. 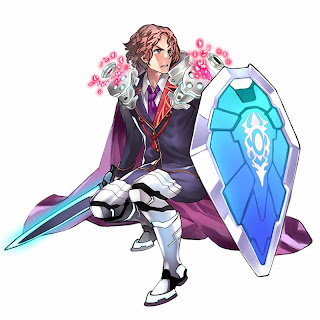 This dapper fellow is a member of the game's tanking class. At least his enormous shield and pauldrens. 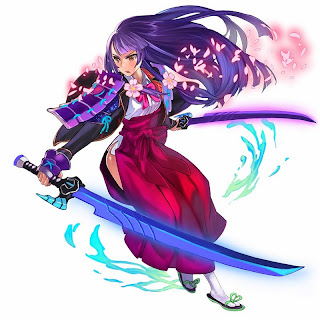 Oh yeah, token Samurai character. I think this class does a lot of damage or attacks really quickly or something. The electro-cherry blossoms are neat. 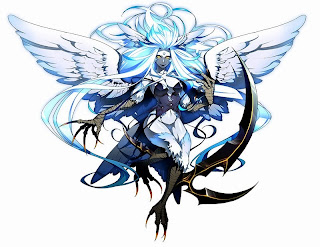 We've seen plenty of character stuff, so here are some monsters.

I love lady monsters. I love the conflicting feelings you get from this one's "Come hither" look versus the fact that she is otherwise made up of sharp implements. 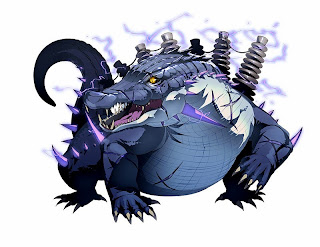 This is the best picture in the whole post.
I mean, do I even need to explain? 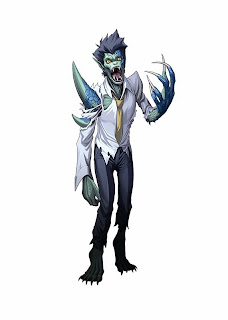 Oh, it seems like the "Goblins" of the game are these mutated businessmen. I don't even know whats going on with this guy - I don't think he does either, which might be why he's so irate.
Posted by NaldoDrinan at 5:51 PM 3 comments:

Here are examples of what some powerful magic weapons may look like in Akenia. All these weapons are in set places on the map and won't appear randomly - though characters may attempt to find them through research and questing.

The weapons below all strike as magical weapons and unless noted otherwise are considered Martial weapons per Akenia's house rules. They are Bastard or Long Swords in other games, depending on how generous you're feeling.

Mockery of Honor - Stained with the betrayal of a once great knight, this weapon affords its master a +2 bonus to all saving throws and immunity to all forms of fear and disease. It glimmers softly in the presence of evil and drips fresh gore when near someone truly good.

Glorious Edge - This sword's pearlescent blade cannot be marred by rust, blood or grime. Anyone holding the blade benefits from a Protection from Evil spell that it constantly radiates. Additionally, if a creature of dark alignment is struck by this sword they suffer an effect identical to a Cause Fear spell as if cast by a cleric of the same level as the wielder unless a save versus spell is made.

Bloom - Made of moonsilver and magically sustained flowers, this weapon sows the seeds of its blossoms in those struck by it. Every time more then one point of damage is done by this sword, the target must make a saving throw versus poison or take 1d3 points of dexterity damage as said flowers begin to grow in their body and burst through their skin. This is cumulative, and if one's dexterity is reduced to zero or less this way, they are lost forever as they become a living colony for the bloom.

Discordant Razor - This weapon's movements seem wild and erratic, no matter how skilled the wielder happens to be. Being struck by the sword further confuses the target, who must succeed a saving throw versus spell or have their next action altered negatively by the Razor's power. Victims of this ability will preform in the exact opposite manner of their intent.

Grandesh - Widely considered to be the finest sword in all of the world, the Grandesh always strikes as if a target's AC was 10 (or whatever the base, unarmored Armor Class is in your rule-set of choice) and does 1d4 + 4 points of damage on a successful attack. This weapon is capable of slaying gods, and is rumored to be the reason they have all fled Akenia.

Fen's Equalizer - Once a month, when this sword's owner is faced with a foe whose Hit Die is double their own, it creates an exact copy of its wielder (all non-magical equipment is also replicated, as is the Equalizer) to assist the original in battle. Clones are created in till the accumulated level of the wielder and his copies would exceed their enemy's hit die. (therefore, a 2nd level fighter would end up with 1 clone when facing a 4 HD lion, or 2 clones when facing a 6 HD bear and so on.)

Said clones vanish after battle. If any of them perish during the fight, then the wielder dies when the other dissipate, leaving the Equalizer without a master.

Posted by NaldoDrinan at 6:56 PM No comments:

An good map for once.

Like Barovania before it, Kiel Chenier has provided me with an extremely kick ass version of Akenia's map, as seen below. He's also accepting commissions for other maps, and I can't recommend him enough.

Wonderful things like this help make me excited about my own setting. Please, feel free to ask questions now that the map actually looks like something! 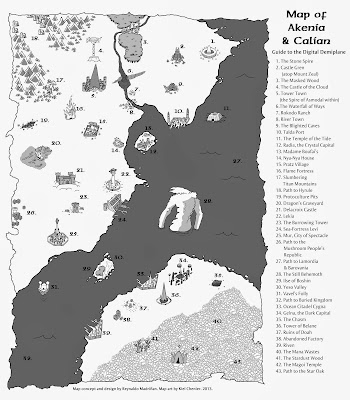 Posted by NaldoDrinan at 6:05 PM 2 comments: