On this day, a newly formed band of adventurers ventured forth from Jova City,

Corkin, a bard from afar, armed with sharp wit, sword and silver tongue. A con man, ne'er-do-well or dashing rogue depending on whose doing the telling,
(Played by this guy)

Dallas, a pleasure android from a distant star, who was mistakenly para-dropped on Barovania and handed a mission intended for a war-droid,
(As portrayed by Miss Metal versus Skin herself) 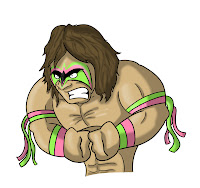 Rhyder Wolfsbane, another adventurer from elsewhere, a warrior of  one mind and spirit, wielder of treasures both strange and powerful,
(He Be John) 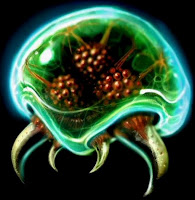 And...squid, a creature whose odd nature and mind controlling abilities suggest the distant land of Bluetroid, even if such things remain unconfirmed.
(Also no blog as far as I know, but he's Kasper)


OK, actually with this crew, I think I can drop the goofy fantasy novel tone. We ain't fooling anyone at this point.

So I've found that generally, FLAILSNAILS groups fall in two categories - people raid dungeons like pros and people who get into lots of trouble via random encounters and fleecing NPCs. It took me about three minutes to realize this group was most definitely the latter. After the briefest of deliberations on where exactly to go, Corkin decides that Tser Falls is the best call - they can bother the Vistani along the way, and every one knows there is always cool stuff behind a waterfall. I should note that Squid can control people by attaching to their head, and that he began the adventure with all the other characters believing he was a a local corn farmer wearing a very funny looking hat.

The Vistani descend upon our "heroes" as soon as they enter the encampment, thinking that they are easy targets with deep pockets. They make sure to inform the players about the fortune teller who will predict their futures for a nominal fee. I get all excited and pull out my copy of "Vornheim" only to have Corkin reverse everything by offering to tell her fortune instead. He has a high charisma and blah blah astrology credentials so I figure that she humors him at least. He then proceeds to rock at both role-playing this situation AND rolling a charisma check. The fortune teller is deeply concerned with the mental state of her estranged sister and not on her possessions at the moment. While she rushes them out the door to prepare for an impromptu visit to her sibling, Corkin pockets what he can of her stuff.

Not done with with robbing gypsy-analogs (or slight irony) these fellows later manage to freak the hell out of a black market weapons dealer and lifting some of his stuff. Altercations with a Vistani tough leads to Squid discarding his Corn-farmer host for a fatter, stronger specimen. Satisfied with their haul, the group finally sets out once more towards the Tser falls. In my hubris, I decide that I should roll too see if there are any random encounters on the way there. It was in the spirit of the game, after all. I roll, look at my scrabbly little table and see that they are about to have a peachy little brush with royalty. 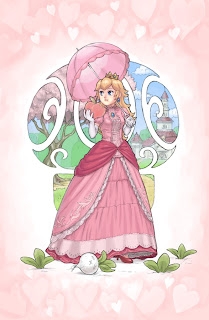 HA, I am so clever because Peach is her name and can also be an adjective. Anyway, on the road they pass by a carriage being pulled by a strange, sphere shaped creature on a chain. The thing has beady eyes and a nasty set of teeth, so Rhyder decides he wants to stare it down. He proceeds to posture and growl at it, which stalls the the movement of the carriage as it responds in kind. Squid uses his host to bully a small, mushroom hat wearing retainer and takes aforementioned hat. Dallas, the wisest amongst them, backs away from the situation. Corkin takes a more proactive approach, beginning a touching serenade to a princess he has not seen just yet, as well as offering her a small item lifted off the Corn Farmer from before. Peach exits her ride to greet the men, for on top of being slightly vain and curious, she is a secret bad-ass and isn't really afraid of anything.

Fortunately for the group, not only is Corkin's impromptu Shakespeare is enough to ignore her aggravated beast of burden and now hatless retainer, its enough for them to receive a small gift from her in reciprocation for the sly Bard's tribute. Of course, the sneaky little get uses this as a chance to lift some more treasure off the princess, and manages to do so again. These are with the crappy percentile thief skills a la AD&D, even!

The goons finally make it to the damn waterfall, find the "secret entrance" and note that said waterfall seems to have clean and pristine water that comes from nowhere. Even more curious, they enter the cave behind Tser Falls and poke around a bit finding a few strange crystals, and some conspicuous rubble. Oh right, they also screw around with an enormous and disturbingly deep pool of mud. They decide to roll a big rock into the mud, in an attempt to test stuff out. 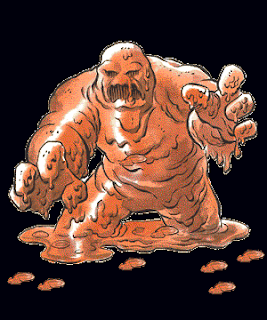 Holy Smokes! In a revelation that probably surprised nobody, the pool of mud turned out to be a  MUDMAN! A desperate fight ensures, and Corkin runs away since he's pretty much a wuss and his player actually had to get going. With further establishment of the Bard's less then stellar character out of the way, the rest of the party digs for an epic battle.

Which didn't actually occur. Our heroes managed to make use of the scenery and defeated the mudman pretty soundly, though it did cost the life of Squid's strong/fat host and one of his more powerful mutations. After the little flying alien's freeze-beam temper tantrum, the party clears away the rubble to enter a very strange room.

Corpses bent in various positions of reverence. A pristine statue of an amphibious humanoid. Some other odd and noteworthy stuff. But hey, it was time to wrap up so we did. Maybe next week will be more serious. Maybe it won't.

I'll be happy either way.

Posted by NaldoDrinan at 8:25 PM